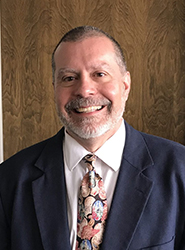 Dr. Haddox’s research focuses primarily on twentieth-century American literature (especially the novel), with strong emphases in the relationship between religion and literature and in Southern literature. He also works in the field of literary theory and have particular interests in the disciplinary overlaps among literary study, history, and aesthetics. His books include Hard Sayings: The Rhetoric of Christian Orthodoxy in Late Modern Fiction (Ohio State UP, 2013), The Limits of Literary Historicism (co-edited with Allen Dunn, U of Tennessee P, 2011), and Fears and Fascinations: Representing Catholicism in the American South (Fordham UP, 2005). He is currently at work on a book project with the working title Toward a Narrative Theory of Grace.”

Recent courses that he has taught include ENGL 341 (Religion and Spirituality in American Literature); ENGL 441 (Southern Literature); ENGL 690 (Special Topics: What We Talk about When We Talk about Historicism); ENGL 436 (Modern American Novel); and several sections of ENGL 482, the department’s Major Authors course (Flannery O’Connor and Muriel Spark, William Faulkner, and Eudora Welty and Richard Wright).