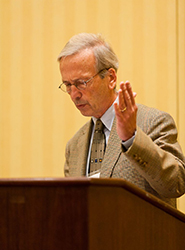 Robert E. Stillman received his B.A. degree from New College, his M.A. and Ph.D. from the University of Pennsylvania and served as postdoctoral fellow in the Society of Fellows in the Humanities at Columbia University. His primary field of scholarly research is early modern literature and culture, with a particular emphasis on questions of language, poetics, politics, and religion in relation to English fictions of the sixteenth and seventeenth centuries. He has written books about Philip Sidney and the poetics of pastoralism (Sidney’s Poetic Justice, 1986); about England’s universal language movement and the natural and political philosophies of Francis Bacon, Thomas Hobbes, and John Wilkins (The New Philosophies and Universal Languages, 1986); and about Philip Sidney’s cosmopolitanism and his invention of poesis as a vehicle of cultural praxis (Philip Sidney and the Poetics of Renaissance Cosmopolitanism, 2006). His most recent book is entitled Christian Identity, Piety, and Politics in Early Modern England. It was published by Notre Dame University Press in its series on Re-Formations: Medieval to Early Modern (2021). The book restores to critical and historical attention a body of important English fiction makers, intellectuals, and political actors who responded to the confessionally driven religious wars of the late sixteenth-century by piously refusing to identify themselves with any particular church. The book includes chapters on John Harington, Philip and Mary Sidney, Henry Constable, Aemilia Lanyer, Robert Devereux, the Earl of Essex, and James I. In addition to these books, Professor Stillman has published articles in a wide variety of venues from Modern Philology and ELR (English Literary Renaissance) to ELH and Spenser Studies. He is the book review editor for The Sidney Journal and an organizer for the annual conferences sponsored by the International Sidney Society at the Sixteenth-Century Studies Conference, the Renaissance Association of America Conference, and Kalamazoo.

His teaching interests are varied. He offers classes at every level of the undergraduate and graduate program, from the Introduction to Shakespeare (206) to Early and Late Shakespeare (404 and 405), to courses that survey non-dramatic literature of the sixteenth and seventeenth centuries (521), to seminars on topics of importance to early modern studies. He has created a new class, Shakespeare and Film (English 306). He regularly teaches off-campus courses in dramatic performance, both in New York and the United Kingdom (English 491 and 492), reflecting his belief that the best educational experiences happen sometimes outside of university walls. He has won departmental awards for the quality of his teaching (the Hodges Award for Assistant Professors), and the Chancellor’s Award for Teaching Excellence; he has served as a Chancellor’s Teaching Scholar; and he has won the Alumni Award for Outstanding Teaching.