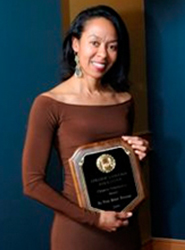 La Vinia Delois Jennings’s course offerings have ranged from undergraduate honors courses to graduate seminars bearing provocative titles such as “Racial Passing and the New Millennium Minstrel Show”; “Consciousness and Memory: The Materialization and Visualization of the Immaterial in Twentieth-Century Literature and Film”; “Identifiable Qualities: West African Traditional Cosmologies in the Novels of Toni Morrison”; and “The African-American Libretto as Literature.”

She has received the Jefferson Prize (1999), an award given by the Chancellor and one of the University’s highest; the Junior Faculty Teaching Award (1995-96), given by the College of Arts and Sciences; and the John C. Hodges Excellence in Teaching Award (1994), presented by the University of Tennessee’s English Department. In 1998, Dr. Jennings was appointed a Fulbright Senior Lecturer at the University of Málaga in Spain. From 2010-2013, she held a Lindsay Young Professorship. In 2013, the College of Arts and Sciences appointed her Distinguished Professor in the Humanities.

Professor Jennings is the author of Toni Morrison and the Idea of Africa (Cambridge UP, 2008) which won the 2008 Toni Morrison Society Prize for Best Single-Authored Book on the literary work of the Nobel Laureate and Pulitzer Prize-winning author. The critical study also received the College Language Association’s Outstanding Scholarship Award. On May 25, 2018, her edited collection, Margaret Garner: The Premiere Performances of Toni Morrison’s Libretto (Charlottesville: U of Virginia P, 2016), received the Toni Morrison Society Book Prize 2015-17 for Best Edited Book on the work of the Nobel laureate.