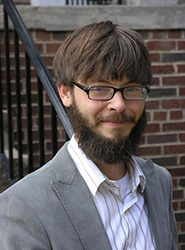 Jeff Ringer conducts research in two areas: religious rhetorics, particularly as they relate to evangelical Christian rhetorics, and writing transfer. Regarding the former, Ringer has published widely in the field and has sought to understand more deeply the problems and possibilities for civil discourse and rhetorical education latent within contemporary evangelical Christian discourse. His emphases in that scholarly trajectory have ranged from qualitatively investigating the writing of evangelical Christian students at public universities to rhetorically analyzing the environmentalist rhetoric of Katharine Hayhoe and the use of the term “evangelical” on Twitter in 2019. With Mike DePalma and Paul Lynch, Ringer helped edited Rhetoric and Religion in the Twenty-First Century: Pluralism in a Postsecular Age, a collection that is forthcoming from Southern Illinois University Press in 2023.

Ringer’s current research centers on writing transfer. With his colleague Sean Morey, he recently published “Posthumanizing Writing Transfer” in College English, and he is currently collaborating with an advanced undergraduate student to design a qualitative study that considers how writing technologies might inform writing transfer. Ringer’s current book project takes a historical turn and asks when and why the field of rhetoric and writing studies started thinking about writing and rhetorical education in terms of learning transfer. Employing a version of Foucault’s genealogical method, Ringer is examining the conditions that give rise to several emergences of writing transfer—historical moments when writing was articulated with one or more theories of learning transfer—and asking what those emergences can tell us about the field’s current, sustained interest in writing transfer.