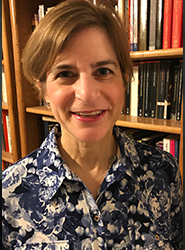 Heather Hirschfeld specializes in early modern English literature, focusing on Shakespeare, Renaissance drama and religious controversy, and the history of authorship, collaboration, and textual communities. Her work on “the end of satisfaction” was awarded an NEH Fellowship for 2009-2010, and she received College awards for her scholarship in 2004 and 2018.

At the undergraduate level, she loves teaching introductory and advanced courses in Shakespeare and Renaissance drama (ENGL 206, 404, 405, and 406). Her recent graduate teaching includes seminars on Revenge Tragedy, Accounting for Renaissance Drama, and Shakespeare’s Playbooks. She received College and Chancellor’s awards for her teaching in 2007 and 2016, respectively.

Professor Hirschfeld served as the Riggsby Director of UT’s Marco Institute for Medieval and Renaissance Studies from 2011-2015 and as Director of Undergraduate Studies from 2019022. She now holds the Kenneth Curry Professorship in the English Department. She is co-editor, with Laurie Maguire (Oxford University) and Rory Loughnane (University of Kent) of the Routledge Series on Early Modern Authorship. Her abiding theoretical interest is in psychoanalytic theory, and she has served on the Board of Appalachian Psychoanalytic Society.