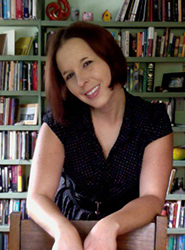 Erin Elizabeth Smith is the Creative Director at the Sundress Academy for the Arts and the Managing Editor of Sundress Publications and The Wardrobe. She is the author of two full-length collections and the editor of two anthologies, Political Punch: Contemporary Poems on the Politics of Identity and Not Somewhere Else But Here: Contemporary Poems on Women and Place. Her poems have appeared in numerous journals, including Mid-American, Crab Orchard Review, Cimarron Review, and Willow Springs, among other. She holds a PhD in Creative Writing from the Center for Writers at the University of Southern Mississippi and teaches in the English Department at the University of Tennessee, where she is also the Jack E. Reese Writer in the Library.