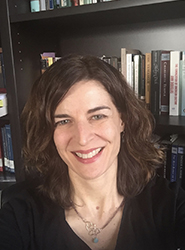 Dr. Coleman specializes in nineteenth-century American literature, with a focus on issues of religion and secularity. Her book, Preaching and the Rise of the American Novel (2013), argues for the sermon as the paradigmatic voice of moral authority in the nineteenth-century United States and analyzes how literary writers appropriated the voice and figure of the popular preacher to claim moral authority for fiction.

Currently she is writing a book titled “Margaret’s Ghosts: Inventing Secular Womanhood in American Literature,” which argues that Margaret Fuller’s life, writings, and tragic death in 1850 catalyzed a new literary and cultural type, the secular woman. Dr. Coleman is also an active Melville scholar. In addition to her many published essays on Melville, she served from 2013–2020 as book review editor of Leviathan: A Journal of Melville Studies and now sits on Leviathan’s advisory board. She is a contributing scholar to Melville’s Marginalia Online and has collaborated on the Melville Electronic Library. She also serves on the advisory board of the American Religion and Literature Society.

She teaches graduate and undergraduate course on American women writers, Herman Melville, the nineteenth-century novel, and topics related to religion, spirituality, and secularism