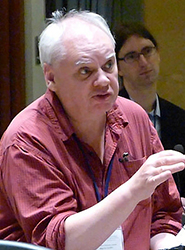 Working in the broad field of American literature and culture, my main interest is the relationship of the literary arts to political ideas and action, both historical and contemporary. My first book Ashes of the Mind explores the role of memory and commemoration for Northern writers in the decades after the Civil War. Since then, I have written on a range of topics, including how narrative dynamics shape debates on cultural policy and cultural diplomacy, the meaning of Irish poet Patrick Kavanagh’s elegy for FDR, and how an American account of the Iraqi coup of 1958 emerges in both fiction and official documentation. My latest book project is a study of connections between modern political ideas and espionage fiction. My regular teaching includes American Fiction to 1900, American Realism and Naturalism, and Introduction to Fiction. I have also taught undergraduate and graduate courses on themes such as World War II in history and memory, American Literature and World War I, and the expatriate voice in American fiction.