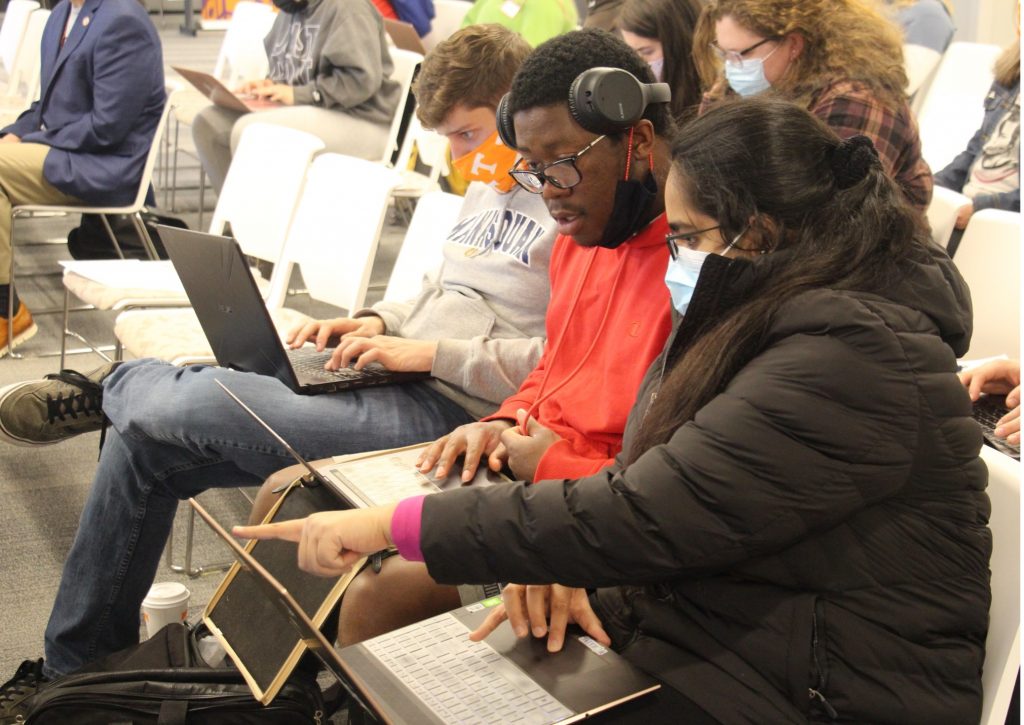 The Department of English sponsors a wide variety of outreach programs that support the greater Knoxville community. Many of these efforts are made possible in part through the generous support of the John C. Hodges Better English Fund, established by Professor John C. Hodges before his death in 1967, to enhance the offerings of the department. Others are collaborative projects by the Office of Diversity and Engagement, the Judith Anderson Herbert Writing Center, community-based institutions such as the Knoxville Museum of Art and the Knoxville Writers’ Guild, and by local public schools.

Give to the John C. Hodges Fund

The College Admissions Personal Essay Tutoring Program project began as a way to support our colleagues and the students at Austin-East, where six students died from gun violence in 2021. That summer, the department and the Judith Anderson Herbert Writing Center began a powerful collaboration with Austin-East High School to make sure that every senior who wanted a private tutor for their college admissions personal essay could have one. Since its modest origins, Kirsten Benson and her team in the JAHWC have been able to scale this program to offer college admissions essay help to seniors at any of East Tennessee’s Flagship High Schools, including Austin-East, Central, and Fulton. In fall of 2021, we also hosted “Literature Explosion” at Austin-East, a week-long series on creative writing, telling your story, and literary engagement. Our Graduate Students in English started a YA Book Club at the Phyllis Wheatley YWCA in East Knoxville 2020, building on the previous Poetry Project. These ambitious and growing projects are supported by the Office of Diversity and Engagement, the Judith Anderson Herbert Writing Center Endowment, the John C. Hodges Better English Fund, and our alumni donors.

The English department is the main sponsor and organizer of Frederick Douglass Day events each year on February 14. We are in a partnership with other universities across the country, including Princeton, Penn State, Washington University, and Howard University, with live-feed events and in-person activities each year. They have included a live transcribe-a-thon, which allows current UT students to participate in digital archival work that preserves the papers of Black writers and historical figures such as Mary Church Terrell, Anna Julia Cooper, and Mary Ann Shadd Cary.

Faculty members and students in the Department of English perform extensive community outreach and public service. Many, for example, have lead discussions of literary works or given public readings at schools, bookstores, places of worship, and other community venues. They are regular participants in the UT Humanities Center’s Public Books Circle, in Knox County Schools In-Service Days, at in collaborative efforts with The Bottom and The Change Center.

Many have also been active in the Knoxville Writers’ Guild, an organization of local authors that provides a forum for information, support, and sharing among writers and that seeks to promote writing and creativity in the wider community through education, publication, and sponsorship of writing-related public events.