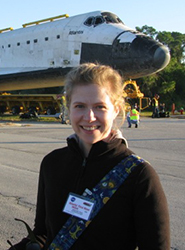 Professor Dean is the author of three books. The first, a novel, (The Time It Takes to Fall, Simon & Schuster, 2007) was the recipient of an award from the National Endowment for the Arts. The second, (Leaving Orbit: Notes from the Last Days of American Spaceflight, Graywolf Press, 2015), was named one of the top ten books of 2015 by the New York Times. Most recently, she co-wrote Endurance (Knopf, 2017) with astronaut Scott Kelly. Endurance was a New York Times bestseller, was translated into twenty-three languages, and is being adapted into a feature film. Other work has appeared recently in Popular Mechanics, the Washington Post, Longreads, the New Yorker, and in program notes for the National Theatre of London. Her research interests include contemporary fiction, contemporary creative nonfiction, screenwriting, creative writing pedagogy, gender studies, literature of disaster, and literature of spaceflight.