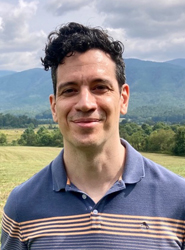 My research focuses on Romanticism and its relation to political energies (revolutions, parliamentary reform, mass activism). My first book, Radical Orientalism: Rights, Reform, and Romanticism (Cambridge UP), reconsidered the crosscultural poetics of Byron, the Shelleys, and reformers in light of the liberal politics and economics shaking up Britain after the French Revolution. My current project, Generic Politics, examines how Romantic political life and social conflict were shaped by the genres and pleasures of literary and visual culture. Many of my articles can be found here.

My teaching focuses on poetry (Romantic and beyond), the Gothic, Jane Austen, politics and literature, queer theory, gender studies, and affect theory. Writing by graduate students in the latter courses has populated a WordPress site in affect theory, “Affectsphere.”

My work has been funded by the Fulbright Program (Morocco), the University of Tennessee Humanities Center, the U.S. Department of Education, and the Mellon Foundation.