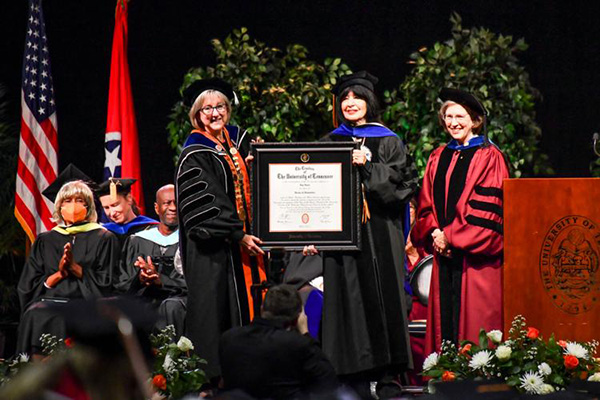 Joy Harjo served as Chair of Excellence in Creative Writing from 2016–2018.

This article is a reproduction of the same found at UTDailyBeacon.com.

On Saturday morning, UT conferred degrees on around 1,100 undergraduate students during the College of Arts and Sciences commencement in Thompson-Boling Arena, the largest of 11 commencements taking place over the weekend to honor the class of 2022.

There was one degree, however, that received more attention than any other. Chancellor Donde Plowman presented Joy Harjo, 23rd United States poet laureate and former John C. Hodges Chair of Excellence in English at UT, with an honorary doctorate.

Harjo is an internationally renowned poet, performer, writer and musician and a member of the Muscogee (Creek) Nation. In 2019, Harjo was named the first Native American poet laureate after serving as a professor at UT for three years. She is only the second poet laureate to be appointed to a third term.

The poet laureate serves through the Library of Congress and stands as the nation’s official poet. Past poet laureates include Robert Frost, Robert Penn Warren, Gwendolyn Brooks and Tracy K. Smith.

As commencement speaker, Harjo combined personal narrative, poetry and history into a sweeping tribute to the power of stories to help a young generation heal from recent history and build a new future. Wearing the regalia of her doctorate and speaking in her distinct poetic voice, she challenged the graduating class to write a new story for themselves and their community.

Honorary doctorates must be approved by campus administration, the faculty senate and the UT Board of Trustees and are awarded to artists, scientists, activists, leaders and public servants. Past recipients include scientist E. O. Wilson, former Governor Phil Bredesen, Vice President Al Gore and Dolly Parton.

Harjo’s doctorate honors her award-winning career as a writer and performer, across which she has written nine books of poetry, two memoirs, two children’s books, three plays, produced seven albums of music and edited several volumes of Native poetry.

In her address, Harjo told stories of her historical connection to the Knoxville region, where ancestors of the Muscogee Nation once lived. She said the decision to leave Knoxville when she was appointed poet laureate was weighted with the history of forced removal.

“Our Native nation’s families did not leave these beloved lands by choice. We were marched from our homes. We were rounded up with everything we could carry,” Harjo said. “We were forced to leave behind houses, printing presses, stores, cattle, schools, pianos, ceremonial grounds, tribal towns, churches.”

Harjo and her husband lived at Cherokee Bluff while in Knoxville, which gave her the chance to stand on ground where her grandfather stood years before. Much of her address dealt with the closeness of history and the connectivity of humans and the natural world, themes reflected in her writing.

“An essential member of our community is the Smoky Mountains. These mountains have a spirit. We can feel it, can see it on these early mornings as the smoke, fog winds through these hills of mystery and stunning beauty,” Harjo said. “This story we are in together is profoundly deep with roots that travel eons into the earth, that connect all peoples in the world to all creatures, all plants, all life.”

Harjo’s address came just weeks after the McClung Museum of Natural History and Culture at UT received a $300,000 grant for its upcoming exhibit “A Sense of Indigenous Place: Native American Voices and the Mound at University of Tennessee.”

Harjo taught poetry during her time at the university, and she connected the purpose and process of poetry to the arts and sciences more generally. Early in her address, she read her poem “Eagle Poem” from her 1990 collection “In Mad Love and War.” In a nod to UT and Knoxville, she changed the text’s original reference to the Salt River in Arizona to the Tennessee River instead.

“Poetry is the place we go when we have no words. Poetry shows up to be of service when we are in grief, in celebration, at transformational moments in our lives like falling in love, breaking up, marriage, coming of age, at any crisis of becoming like war and pandemic,” Harjo said. “I write for healing, for justice, towards understanding what has been wordless within. Writing poetry is an exact science as math. We puzzle over the same pieces.”

The students of the class of 2022 are the first to have experienced the majority of their college years under the shadow of the COVID-19 pandemic. In each address Saturday, speakers acknowledged the perseverance of graduates and turned commencement into a celebration of the power of the human will to overcome adversity.

“I particularly want to commend this class for sustaining your drive to succeed through our very unexpected and unusual past few years,” Theresa Lee, dean of the College of Arts and Sciences, said. “We are proud of your perseverance and your accomplishments and we are honored to share this wonderful day with you.”

This year’s student speaker, graphic design graduate Cadie Chapell, traced the history she and her classmates have lived through, with an emphasis on the turmoil of the last two decades.

Chapell, like her classmates, was born just before the September 11 attacks and was old enough to remember the 2008 recession. She talked about the rise of active shooter drills in schools, the MeToo movement and worsening climate crises. Finally, she used the hardship of the pandemic as a way to congratulate the class and celebrate the power of the arts and sciences.

“You’re here at 8:30 on a Saturday morning because as the world ended, you didn’t let it end you. You’re here in spite of the chaos, the loss, the unprecedented times. You’ve made it, dragging your way to a degree that is finally yours and fully deserved,” Chapell said.

Harjo thanked Chapell for her speech and shared her belief that “a generation is a person” who experiences the same hardships and builds community together.

“You have made it through times in which we were afraid to step outside our doors because we could die of a virus that had taken hold throughout the world. Some of us did die. We lost too many. We lost many to disease and violence during these times because false stories were constructed to turn us against each other,” Harjo said.

Following a long tradition of Native American writers and artists, Harjo believes in the power of stories not only to heal trauma, but to build better realities and fight against misinformation and violence.

“We are bringing in a new story,” Harjo said in her final message to graduates.