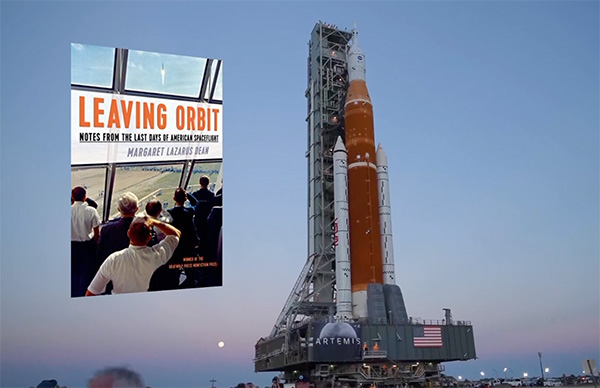 Margaret Dean is an English professor at the University of Tennessee and has authored multiple books on space travel.

This article is a reproduction of the same found at at WBIR.com.

KNOXVILLE, Tenn. — University of Tennessee English professor Margaret Dean was at the Kennedy Space Center in Florida on Monday hoping to watch the launch of the first Artemis test mission.

Unfortunately, the mission was scrubbed because of technical issues.

“I left this very spot 11 years ago, after the last space shuttle launch,” Dean said. “I said, ‘I will be back here when NASA flies the next thing.’ And here I am.”

The “next thing” was the Space Launch System or SLS. It’s the rocket designed by NASA to replace the space shuttle. The first SLS rocket was supposed to launch in 2016, but the project was delayed.

Now, NASA has tapped the SLS rocket to return humans to the moon. The Artemis program will aim for the moon, Mars, and beyond.

NASA said Artemis will also bring the first woman and the first person of color to the moon.

“Everyone here is just so excited about the idea of going back to the moon,” Dean said. “It’s been a long time since we’ve seen human beings on the moon and it would be cool to see that happen again in my lifetime.”

The SLS rocket was scheduled to launch on Monday, fly around the moon, and return to Earth, in its first un-crewed test flight. However, one of the engines on the SLS rocket malfunctioned, forcing NASA to scrub the launch.

NASA designed the SLS to recycle parts from the space shuttles, some parts designed more than 60 years ago.

“I think a lot of the logic behind building this rocket was to try to reuse as much hardware from the retired space shuttle as possible, as a way of saving money,” Dean said. “Space fans are really great at pivoting from grumbling in one minute…to the next minute, really excited to see it go to space.”

NASA said the earliest the Artemis test launch will happen is Friday.