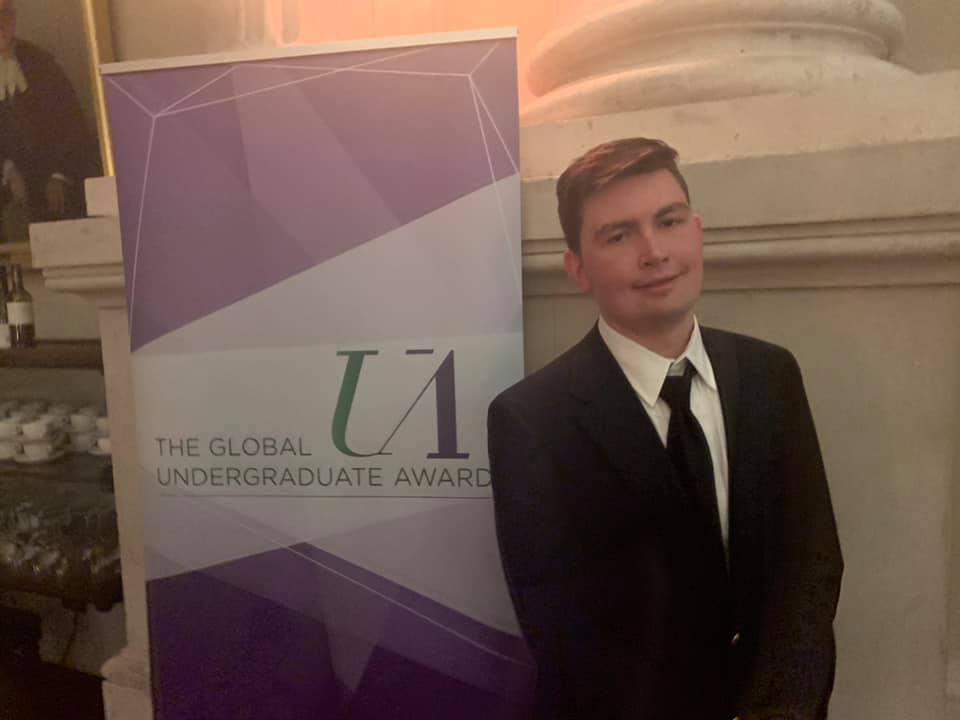 In November, English major Will White traveled to Dublin to present a paper at the Global Undergraduate Awards; the paper had started as an assignment for professor Lisi Schoenbach’s English 398: Law and Literature class. Recently, Professor Schoenbach and Will sat down together to talk about the experience.

Schoenbach: Let’s start by having you tell me about your trip to Ireland, and what brought you there and what you were presenting when you were there.

White: Absolutely. So, I was in Ireland for a couple of days last November for the Global Undergraduate Awards. The Global Undergraduate Awards is a very prestigious conference, and it’s interdisciplinary, so students from all majors from around the world present papers on a wide variety of subjects there. So there are people presenting on physics and mathematics and theater. And my paper was awarded highly recommended in the category of literature, and I was able to not only accept my award but to do a presentation on my paper.
The paper is on Shakespeare’s The Merchant of Venice, but it’s very specifically on how in the late 20s, in the 1930s, and early 40s. The Nazi Party used The Merchant of Venice as very anti-Semitic political propaganda, particularly through the play’s antagonist Shylock whom the Nazi Party saw as a symbol of the tyranny and inferiority of the Jewish people.

Schoenbach: How did the paper go over in that presentation?

White: Well, It’s a very heavy subject. And a lot of people who I talked to, they had no idea that the Nazis were reading Shakespeare. In fact, Shakespeare was, as I learned in my research, one of their favorite writers. [The Nazis] viewed his writings as not only an embodiment of the German spirit, but very nationalist as well. I don’t think that some of the people I talked to had ever really considered that literature can be weaponized, which is what the Nazis tried to do with this play.

Schoenbach: Did it change your idea of The Merchant of Venice to do this research and see how that happened?

White: Not only did it change my opinion of Merchant, it changed my opinion of literature! I never imagined that literature could have such political implications. The play was not only propagandized as literature, but in how it was put on the stage: there is an extremely hateful and terrible production, in 1943 at a theater in Vienna and Shylock was played as this over-the-top grotesque, horrible, horrible caricature of what they viewed as, you know, Jewish monstrosity. And doing the research on both how this play was read and how it was staged, was a reminder for me that we need to be very careful when we’re reading a text to not to not propagandize because literature can have such powerful implications.

Schoenbach: You mentioned that this was an interdisciplinary conference, and [the class you took with me] was a class on interdisciplinarity too, because it was about law and literature. I wonder how you think that framework might have informed your thinking when you were putting the whole argument together.

White: So, because it was a course on law and literature. I framed the paper around a theorist that we read in class, a legal scholar named James Boyd White, and James Boyd White argues that when we’re reading a literary or a legal text, we should be open to interpretive flexibility.  In other words, literature does not have a meaning set in stone. It’s up to. It’s up to the reader. And James Boyd White’s essay that we read had an implication that warned us against viewing a literary or legal text as wielding a set, social, political message. And so the question that popped into my mind was okay, what are the consequences of this idea? You know—what is a real world example of doing this?
Another legal framework I used was researching this paper I cited the Nuremberg laws. And one of the central tenets of the Nuremberg laws was forbidding Jewish-Aryan intermarriage.
And the Nazi Party, their cultural bureau created a very very edited version of The Merchant of Venice and one of the things they did was conform to the Nuremberg laws. So Shylock has a daughter named Jessica, who is Jewish, obviously, like her father. And she ends up marrying a Christian. Well that would have directly violated the Nuremberg laws. So what they did was that they changed Jessica to be Shylock’s Aryan foster-child.

Schoenbach: That’s so interesting. So it sounds like one of the takeaways from James Boyd White and also from your argument about The Merchant of Venice has to do with interpretive vigilance on the part of readers and writers and critics. And, basically, the reminder to constantly guard against propagandizing and that would be sort of your one of the takeaways of the argument. Do you think that is something that (I mean, I know the answer is yes!) you think has a lot of relevance now?

White: Without delving too much into politics I do think that we can say that. I think that we are in a time where we’re seeing a lot of very extreme polarization and very politically charged language, wherever we go. And in the case of Merchant of Venice, I think it’s a mistake to view the play, on one hand as the Nazis did (and morally objectionable) as having the message that Jews are terrible. That’s not what Shakespeare was trying to say. But there are some contemporary scholars who believe that the play is a wholly anti-Semitic and I don’t agree with that either, right, Shylock is shown to have glimpses of humanity, particularly in his very famous “have a Jew not eyes” speech.

Schoenbach: Yeah, and also those different interpretations just mean such different things in the different historical context in which they’re being generated so if a critic is saying something like that in 2010, in the United States, in Berkeley, California. It can’t be the same as someone saying the identical thing in Nazi Germany, either. So that’s just really really interesting.
I know you presented this paper at several events, not just in Ireland but at a couple of other venues.

White: Correct. I also presented this in March 2019, at the National Conference of undergraduate research in Atlanta. And I also did a poster presentation of the paper at UT’s EURECA conference.

Schoenbach: And what do you like most about presenting these kinds of pretty complicated ideas in public? I know it’s challenging to present them in a poster or before an audience who might not be expert in your field and yet really needs to grasp what you’re talking about.

White: It can be daunting but it’s also really fun because not only are you as the presenter, able to share the passion that you have for what you’ve been working on, but you can also see the work of other people and have that exchange, which I think is very important.

Schoenbach: Will, what parts of your experience as an undergrad English major do you most want to carry with you into your future?

White: As English majors, I think that the primary conception, or I should say misconception, is that we just write papers and that’s not true. I’ve had I’ve had the great fortune of support from the English department, as well as the Humanities Center and the Office of Undergraduate Research. They have all given me the generosity of funding me to present my work at these conferences. And it’s taught me that as someone working in the humanities, it’s not just simply a matter of writing your ideas down. You have to engage with the public. And that’s really exciting.

Schoenbach: That’s so great, Will, I love it. And I think we can end there. I think that your work has been wonderful and I’m so proud of what you’ve done here in my class and in your other classes.